Here is a link to watch the interview of Alf with Presidente Piñera.

This year 25 people from churches in the UK, Ireland and the USA will be visiting Paraguay.

During July 2013 a group of Mission Paraguay volunteers will be based at Roque Alonso on the north eastern outskirts of the capital Asunción and visit different communities in the Asunción area.    They will involved in a variety of projects  including work with children; assisting with the toy library organised by FEISA; distribution of spectacles; assisting with the sewing workshops and serving local families in need.  They will also spend 5 days in Concepción working alongside Northern Ireland missionary Claire Holmes.

In August another group will be based entirely in Concepción working with Claire and the team from San Pablo Church. They with travel to different communities in and surrounding Concepción to be involved in a range of evangelistic events and activities particularly focused on children and young people.

Another August group will be based in the Chaco where the indigenous people live in some of the most deprived conditions in Paraguay.  They will be working alongside local people on a variety of building projects under the supervision of missionary Chris Hawksbee.

Projects being funded in Paraguay during 2013 include:

For further information upon any of these projects please contact the coordinator, David Orritt.  Email: davidinparaguay@hotmail.comMission Paraguay

Plans are currently underway for the visits of volunteers from Churches in England and Ireland to work for 3 weeks on a variety of projects organised through the Anglican Church in Paraguay and in association with the South American Mission Society (SAMS).

July Group
This group will be based on the outskirts of Asunción, the capital, and visit a number of different communities in the area. It is planned that the activities will include:

• involvement with the sewing and knitting workshops;
• assisting with a new building project to provide facilities for work with children and young people and for outreach into the local community;
• assisting with basic home improvements in some of the poorest areas of Asunción;
• working with children and young people in a number of communities.

It is anticipated that this group will spend a few days in the Chaco to visit some of the Indian communities where Mission Paraguay has previously worked.

August Group
Some members of the August group will be based in Concepción and it is planned that they will:

• work with Claire Holmes and her team amongst the children and young people in Concepción and the surrounding area;
• undertake some small scale building work and painting;
• visit Yvapovo which is about 2 hours drive from Concepción where Mission Paraguay is funding the construction of a small church for a growing congregation.

Other members of the August group will work in the Chaco. Their activities will include:

• assisting in the completion of the building of a church begun in 2008 at Rio Verde;
• involvement in a variety of home improvements such as the construction of new corrugated metal roofs on Indian homes to replace those made of logs and plastic sheets;
• assisting with a water storage project. In 2009 we hope to be able to fund the building of at least one aljibe (£1,500) which is an underground storage tank for rainwater collection.

As in previous years the July and Chaco groups will have the opportunity to work with FEISA the Anglican Early Years Teacher Training College which operates a mobile toy library and undertakes groundbreaking training and development work in some of the indigenous schools in the Chaco.

All planned projects are dependent upon the available funding at the time of the visits. The cost of the work and activities undertaken are all met from donations from the UK and Ireland. All donations are channelled to Paraguay through the South American Mission Society (SAMS), or Burscough Outreach Trust (Charity No: 1089034).

If you would like further information about how you may support the work of Mission Paraguay or if you wish to take part in a short-term mission trip to Paraguay in 2009, please contact the Co-ordinator, David Orritt via samsirelandhouse@btinternet.com

Please pray that God will direct the plans and arrangements currently underway for the Mission Paraguay programme for 2009. Please also pray for the ongoing work of the Anglican Church in the Chaco, Concepción and Asunción and particularly for Rev. Peter Bartlett who will be instituted as Bishop of Paraguay in March 2009.

Mission Paraguay works through the Anglican Church in Paraguay to provide funds and a volunteer work force to assist with practical projects, usually buildings, which the local church would find difficult, if not impossible to provide themselves. Through the Church we also fund activities with children and young people and a range of community based work to relieve need and hardship.
Each year groups of committed Christians of all ages travel to Paraguay to live and work in the community so gaining a unique opportunity to experience another culture; to see how the local church is working and growing; to share fellowship, laughing and sometimes crying together; to receive and show the love of God. People return home feeling that they have gained far more than they give. Many find that the experience deepens their Christian faith and for some it gives a new direction for their life as they review their priorities.

Peter Hunter is on the Mission Paraguay team in the Chaco.

Rio Verde, The Chaco, Paraguay
As I write this on Friday morning, the sky is overcast, wind blowing and temperature about 25 degrees Celsius…. very pleasant.

After a day in Asuncion and a Sunday service in English (and a refreshing cup of tea and relax with Linn) we headed out to the Chaco (the country), saying goodbye to Laura, Debbie and Mike as they left for the coach to Concepcion. We had a 4-5 hour Landrover trip along the only tarmac’d road to reach Rio Verde where the local garage is also the local store, hardware shop and cafe.
Either side of the road are various homes. Some are of brick, a few official places like police barracks, quite smart……. others small and made from corrugated iron and local trees. The local trees are very hard.

I’ve spent 31/2 days finishing an Indian family’s home. They were slowly making the room from pieces of wood and ‘chapas’ (corrugated iron)…..  all held together by wire and a few nails…. a great example of recycling, with the additional factor that most of the wood is so hard that it bends nails! 3 or 4 of us were working on it. Every time we stopped for a break some of the family gathered around. They are very friendly and we try communicating by sign language, or singing!! The smallest girl was astonished when 2 of us joined in humming ‘Old MacDonald had a farm’.

Luke has been with another group working in a different church community, repairing water reservoirs and building a meeting room. All the team are really friendly and the banter through the day is great.

Whenever we come across Paraguayans there is a very sociable greeting and exchange. Most people in the Chaco in Indian communities have very little, if anything. But they are very friendly and smiley. It has been lovely to see the impact on the family of the house we completed. It is more than a building, it is a gift of hope.

The Lord has kept us safe, which is a real gift here where the opportunities for accidents and injury are legion. Thursday there was a huge storm with hailstones, the size of golf-balls and very high winds……… fortunately not where we are. David Orritt, Tim Curtis and I went 3 hrs towards Concepcion to visit another Anglican community where the church roof had been ripped half off and 30 houses had lost part of their rooves. The damage will take a while to repair. It will need outside funding…….. but the people appear not upset.

Thanks for your prayers.

San Lorenzo is a very poor area with little work.  Dusty earth roads are a quagmire during periods of rain.  Some roads are on an incline so that deep ruts are formed, subsequently setting rock hard making the movement of vehicles extremely difficult…

“Wonderful, fantastic, brilliant and any other superlatives you can think of are how it felt to be able to show ladies from a shanty town called San Lorenzo how to make garments for themselves and their children.  The look of sheer ecstasy on their faces was amazing as they learnt and completed the task.  In the end several pairs of trousers were made.   One elderly lady looked resplendent in a pink suit (jacket and skirt). Her daughter and granddaughter had made trousers and inserted a zip.  Children and adults made scarves.

In Paraguay nothing is wasted and scraps were tied together with string to make dusters.

This has been an amazing experience.
Thank you God, for giving me this opportunity.”
Moira Lindsay, From St.Saviour, Church of Ireland, Co.Armagh.

This summer there are six BTN teams going from Northern Ireland to South America. The work will be varied, but wherever they are, the volunteers will have the opportunity to encounter South America within a supportive environment. Participants form part of a team within a local community working alongside local Christians in outreach and development projects.

“I’ve never been on a mission trip before, so this makes the idea of going to Argentina an exciting prospect but also quite daunting at the same time. I’m looking forward to exploring the Argentinian culture and meeting different Christians over there and seeing how they worship. I hope to gain a great experience from this trip and have a great time while I’m there!” 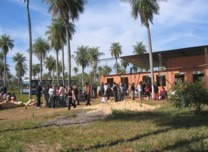 Two teams are going to the Red Box project in Salta Argentina where they will be helping Cecilla Valdiviezo with outreach through the soup kitchen and children’s clubs. Another team from Down and Dromore Diocese are linking up with the Diocese of Northern Argentina to refurbish a retreat centre in La Caldera and experience the life of local churches in the foothills of the Andes. A further two teams will be joining David Orritt in Mission Paraguay focusing on practical projects in Asuncion and Concepcion. Finally, the Love for Life team will again go into schools in Paraguay with their multimedia presentation on relationships.