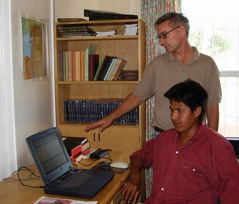 The Enxet (pronounced Enk-let’) are one 18 tribes in Paraguay Chaco. They were first introduced to Christianity at the start of the 20th century by SAMS missionaries. Tim Curtis is coordinator of the Enxet Bible translation project which began in the 1980s. The New Testament was dedicated in 1997 and a team of translators now work on the Old Testament under Tim’s guidance, based at a specially built office in Río Verde.