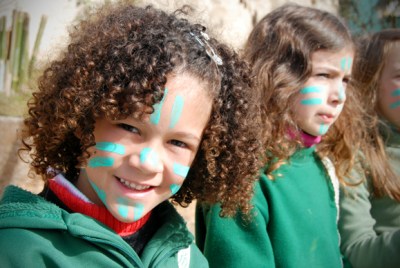 One of the first requests made to the founders of Monte Horebe in 1984 was that a school might be established as part of the mission. The state education system was indeed in existence in Itaperuçu at that time, as it is now, but, with poor resources and class sizes up to 60, the quality of teaching and learning left much to be desired. Despite a number of set-backs, Monte Horebe School developed from an initial 30 pupils to its current 300 plus and from makeshift classrooms to a purpose built school building. The school now teaches pupils up to 14 years of age through the employment of part-time teachers who are subject specialists. Much of this development is due to the continued generosity of supporters here in Northern Ireland as well as others in Canada.

Although delivering a common curriculum, Monte Horebe is deemed to be a “private school”, that is one outside the state system, able to charge fees but still open to state inspection and with the capability of benefitting from some of the initiatives which emanate from state and federal governments. While the fees are far from exorbitant, and are necessary to pay teachers’ salaries, a large number of children from impoverished families, who would otherwise not be able to study at Monte Horebe, benefit from the support of “sponsors” whose gifts ease financial pressure. Parents who cannot afford to pay even a small part are encouraged to pay in kind, for example by helping with cleaning or gardening. The education offered by the school, based on Biblical principles, is in great demand in the community and has led to a number of students gaining places in high quality schools in the equivalent of our Key Stage 4.

John and Phyllis Logan have been involved with the school since their first visit to Monte Horebe in 1994 and while John now does less teaching he remains heavily involved in Principal support as well as in matters of school improvement.  They have seen continued improvements in resourcing and teacher education in the Itaperuçu school as well as positive developments in Caçador where the community centre based school nears readiness for opening.

Please pray that Escola Monte Horebe continues to be a positive force in Itaperuçu.