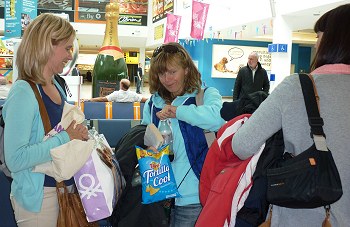 Settled on the banks of the Rio Paraguay, the city of Concepción which has a population of roughly 50,000 inhabitants is completely unheard of by most.

Concepción is the city God has placed on Claire’s heart. The photo taken at the City Airport in Belfast on 18th July is a reminder that we are all called to participate in God’s mission. Share with Claire and pray. Claire is no stranger to Paraguay as she has already served for 14 years with the Anglican Church. Pray for Claire as she returns and keep up to date with prayer updates from SAMS.

Paraguay is a landlocked country located in the center of South America.

Paraguay borders Bolivia and Brazil on the north, Brazil to the east, Argentina to the south, and Bolivia and Argentina to the west. It has a total land area of 157,048 square miles. It is sometimes referred to as the “Heart of America”, owing to its central location in the continent.

Paraguay is divided naturally by the river Paraguay. To the west of the river is the flat deposit of the Gran Chaco, a vast plain which extends from Paraguay into Bolivia, Argentina, and Brazil. This whole region is characterized by grasslands, swamps, and sparse bush coverage. The eastern area consists mainly of plains with rainforest-like vegetation and is drained by the tributaries of the Paraguay and Paraná rivers.

Paraguay has a subtropical climate. In Asunción average temperatures range between 17°C in July and 30°C in January. In the Gran Chaco temperatures exceed 45°C on hot days. In Concepción the climate is usually between Asunción and the Gran Chaco. Generally the main rainy season lasts from December to March.

Paraguay declared its independence from Spain in 1811.