Following the successful mission trip by young people from Down and Dromore Diocese to Northern Argentina SAMS Ireland is launching a new project – La Caldera 2010. The project aims to help the Anglican church in Northern Argentina to develop following several difficult years.

La Caldera is a retreat centre 30 minutes from the regional capital Salta. It is a key centre for the ministry of the diocese as it is the focus for outreach and ministry training. The original building is 100 years old and badly in need of repair. In July 2008 the team of young people started to help rebuild the retreat centre. Following this trip Bishop Harold Millar has asked that the young people of Down and Dromore and DDYC will help with an on-going project called la Caldera 2010. 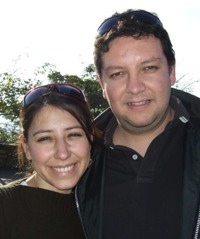 Another key part of this project will be to sponsor the training of ordinands in the Anglican church in Argentina. Key ministry students will be identified and brought to Ireland to meet interested churches. The students will spend some time getting to know the congregation who will then follow their progress through theological college in South America and pray for them as they begin ordained ministry. The first students to be chosen are Dani and Flavia Lescano, they are just starting their 2nd year in theological training in Buenos Aires.