I can hardly believe I’m sitting down to write what will be my last prayer letter. This year has flow by, and God has taught me so much during the year.

A sad piece of news to begin with. Many will remember Romina from my last prayer letter. Indeed a lot of people will have been among those who raised the money for her operations and subsequent treatment. Romina received her second operation during holy week. She had recovered well, and had returned home. Unfortunately she took ill about a week after the operation. She was brought straight to hospital but despite the best efforts of her medical team she was unable to pull through. Romina was a very special little girl and anyone who met her immediately sensed her fighting spirit.

We can only thank God for the opportunity of getting to know her that little bit during her lifetime, and for the chance to show God’s love to her. 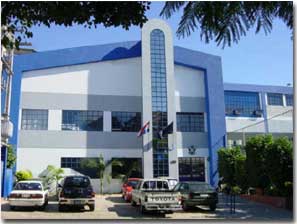 In school the term has been action packed. The staff all started back with a service on the first day, to get us all ready for a new year. The kids came back about 10 days later and there was a joint assembly with primary and secondary together. It is very uplifting to be in a school where God is given the first focus of new year, and seeing the kids really respond to that.
So far each year in secondary has already taken a camp. Some were survival camps and others were more practical community based projects. The first set of school exams began last week, and continue until the end of May. This is a difficult time for the students. Since they are only permitted by the education authorities to have one exam per day, the exams stretch for a long time. Please pray for strength and perseverance on their behalf, so they do the best they can.

At Easter time I had a visit from my parents, and was able to take a few days back at the Iguazú waterfalls in Brazil. It was a good break from school, and a good time was spent catching up from things at home. Their visit also served to start to prepare me mentally for the return home. I have to say this is not a journey I’m particularly looking forward to! I very much enjoy Paraguay and feel very at home here. The people are friendly and returning home will not be terribly easy, as there are at least some people who it is unlikely I’ll ever see again, for various reasons. Please pray that over the next few weeks God would begin to prepare me spiritually and mentally for the challenges I will face once I return home. Pray for strength and that he would give me a peace that comes from knowing that his will is being done, even if mine isn’t!

The most exciting times for me at the minute are ever fortnight on Saturday mornings. This is when the church has its kids club for children from the “Chacarita”. This is the name given to the shanty town area not far from where we live. The kids are so happy with so very little. We start the day by giving them a shower, which they badly need! They leave their clothes which get washed before the next time for them. At the start of the year they were all given new clothes. Nothing flash, but they were so happy to get them! My parents go photos of the kids while they were here, so I had those printed for them. I made a poster of all the photos, cutting them out to form a heart shape. When I looked the kids were picking the photos off the poster. It turns out they’d never had their photos taken, least of all had the chance to take a photo of themselves home to keep, so they were all picking off their photos to take home! It was so humbling to think something so normal like a photograph could mean so much to someone.

Over the next two months school will resume normality after exams. I plan to take a final visit to Concepción in June to visit Clare Holmes. The majority of the time will however be inevitably spent getting ready to leave.

Please pray for that, and all the goodbyes, and I’ll see most of you quite soon!