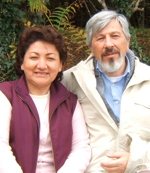 Hugo began his ministry in the north of Argentina in the early 1980’s as a medical doctor in the Chaco. He later joined the diocese, was ordained and planted the Church of Grace in Tucumán. SAMS  had the pleasure of sending a BTN Team during the construction of this church building.   Hugo and Techi, who have two grown-up children, now live in Salta from where Hugo spends much time visiting both urban and rural churches in his capacity as archdeacon and Techi ministers in numerous ways.