View a video produced by James McPartland about his visit to the Chaco this year.

NOTE: You will require a Microsoft Live,  Hotmail,  Messenger, or Xbox account to be able to login and view the video.

St. Andrew’s College Asuncion Paraguay is a Christian school offering lessons in both English and Spanish to its pupils. The head of the college is Gwen Carlisle and the deputy head is Mags Southern, both SAMS mission partners. From an English-speaking kindergarten for five children in 1963, St Andrew’s has grown into one of Paraguay’s most significant educational institutions, with around 400 pupils. 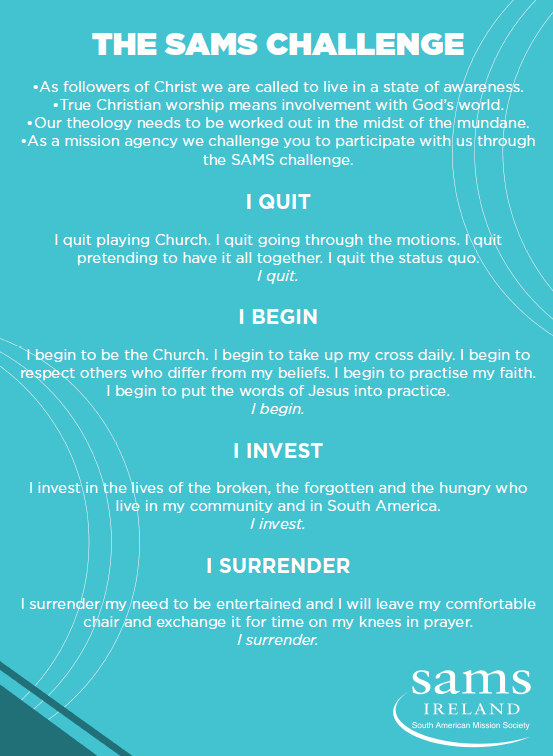 During 2011 Mission Paraguay plans to fund a range  of projects arranged in consultation with the Anglican Church in Paraguay.   While local labour is employed to undertake much of the work, during July and August, 18 volunteers from churches across Northern Ireland and England will each spend three weeks in Paraguay to assist with the projects.

I thought it was about time I kept you up to date with events in the Esperanza Foster Home in Asuncion. Firstly, a big thank you to all those who purchased the “Present Aid” Christmas cards that we made with Paraguayan lace snowflakes. We were really encouraged at how much we raised (over £1000 ) and are planning to do the same again next Christmas so do bear us in mind as you approach the end of the year!

The funds are certainly necessary as Esperanza is back up to its full quota of 5 children following the adoption of Alexis at the end of last year. In fact, for a brief time there were 6 children in the home as a local Judge insisted that a 3 month old girl be cared for in Esperanza while she found her a foster family. Thankfully this has now been achieved which is unusual for Paraguay where it is very difficult to find foster families as there is no funding available. The child who has replaced Alexis for a longer stay is a 2 month old boy called Santiago (James). He is doing extremely well and has grown considerably in the short time he’s been there, but a child of that age is very demanding for Juana and Mariela, her niece, who now works full time in the home. Actually, I know that Juana adores babies so she is probably delighted despite the extra work.

When I last wrote to you I mentioned that little Jose Antonio had missed out on the chance to have surgery on his cleft palate. Teresa wrote a few days ago saying “Operation Smile” were in Asuncion again and she was hopeful that Jose could now be included. The State has now declared him officially “adoptable” but she is worried that no prospective parents will come forward due to his special needs.

The legal situation of the remaining children, Barbara, Victor and Sebastian has not improved since I last wrote, in fact Teresa tells me that in one case Social Services have decided to begin the entire assessment process again.

If the birth parents are in prison or struggling with addictions or in psychiatric institutions it is very difficult for decisions to be made about the children’s future, hence the need for the loving care that Esperanza offers. If you pray, we would very much appreciate your prayers for resolution of the cases of these 3 children.

Every now and again it is possible to see how valuable time spent in Esperanza can be, as some adoptive parents are keen to keep a connection with the home. Teresa wrote last month of being invited to lunch with a family who adopted 2 brothers from Esperanza. She was thrilled and moved to see them doing so well in their new family.

Murray is still hoping to go to Asuncion in July. There are plans for him to get together with short term volunteers from “Mission Paraguay” (run by the Anglican church) to do some redecorating in the home.

As always, it is a challenge to raise sufficient funds to keep the home open on an ongoing basis. If you know of anybody who might consider starting a standing order or doing a fundraising event for us, I have lots of copies of our leaflet that I could send you.

Wishing you every blessing

They threw down their nets

and they followed Him.

There was no time to

There was no time to

call home for a second opinion.

But it was a wise madness,

and sank beneath waves.

The new faith walked on water,

beckoning on to Jerusalem

and the dry hills around.

God of broken people & broken places
we confess to you our love of comfort,
of the known & predictable,
of the safe & secure.
We recognise that you call us into places that are ‘beyond the norm’.
To leave at times what we know & venture into places of discomfort.
We want to follow you, but it’s hard to leave the familiar,
help us to trust you, & journey in faith.

God of broken people & broken places
We thank you for all the connections we have with South America.
We thank you for the space to listen, to grow, to be disappointed & to be challenged.
We recognise that you are calling us on,
to leave what we know & venture with you into new things, into engagement & participation, into creativity & risk, into new structures & opportunities.
We want to follow you, but it’s hard to leave what we know & we’re not sure where we’re going
Help us to trust you, & to continue on the journey of faith.

God of rebuilt people & rebuilt places, you have plans for people like us, & plans for our brothers & sisters in South America.

God of transformation we commit our lives to your save keeping & with hope we continue on the journey of faith.

One of the Chilean miners rescued after a record 69 days trapped underground addressed hundreds of people at a mission conference in Craigavon on Friday. Jose Henriquez, along with his wife Blanca, were among the guest speakers at the “Friday Night Live” mission event organised by the South American Mission Society (SAMS) Ireland. SAMS Ireland has seen growth in recent years with around 700 people packing the Craigavon Civic Centre to hear reports of the work of the Anglican Church in Paraguay, Chile, Argentina, Brazil and Spain.

Jose Henriquez became known as the “Pastor” among the 33 miners because he held fast to his faith in Jesus and led the group in daily prayer and Bible reading. Speaking to the crowd in the Civic Centre through a translator, he explained how his faith helped him survive and revealed previously unknown details such as number of the miners committed their lives to Christ during the crisis. Jose’s wife Blanca, whose reunion with her husband as he emerged from the rescue capsule was seen by up to a billion people live on television, explained how her faith helped her during the ordeal.

The Rev. Alf Cooper, a SAMS prayer partner and the chaplain to the president of Chile, was translating for Jose and Blanca. Alf led the nation’s prayers during the miner crisis and was on the scene during the rescue. He is passionate about mission and is well known for his evangelism and is the leader of a rapidly growing church in Chile. Speaking at the Friday Night Live event he said, “The world witnessed a miracle when Jose was pulled from the depths of the earth. Psalm 130:1 says, “Out of the depths I cry to you Lord”, each of us can experience the same miracle when we cry out to Jesus for salvation.”

Earlier in the evening the Mayor of Craigavon Mr Stephen Moutray MLA, hosted a reception for the Chileans and key people from the SAMS Ireland family. Commenting on the event the Mayor said, “I’ve known of the excellent work of SAMS Ireland for many years. The quality of their staff and mission partners is second to none.  We’re delighted that Jose, Blanca and Alf chose Craigavon for their first visit to Northern Ireland.  There is no doubt that the Chilean Miner has left a deep impression on all of us.”

Other guest speakers at “Friday Night Live” included Gwen Carlisle and Mags Southern, teachers who have worked for over 30 years in St Andrew’s College in Asunción, an Anglican school in Paraguay.  They thanked SAMS Ireland for the quality of the teachers from Ireland who have served there as missionary teachers over the years. Several SAMS Ireland Latin American nationals working in local churches here reported on the growing trend of South American Christians pioneering mission in Ireland.

Take a moment and remind yourself of one of the greatest things about the winter months – a real fire! This is challenging if you don’t have a real fire, so find one and then switch off all the so-called advancements of modern technology and take a few moments to just stare at the fire and be still.

Constantly we are influenced by advertisers and the media to seek ‘more,’ yet deep down we know that the ‘more’ they try to sell us doesn’t actually meet our deeper needs. At this point, if we are courageous, we have a moment of opportunity to ask searching questions. Unconsciously we can buy into a system which has been hyped up by a fast-moving, instant-reward culture, so that we are addicted to a need for excitement.

Without ‘winter fire’ moments our lives can take on a recurring pattern alternating between boom and bust. The bubble bursts and we seek the next hit as we deny our inner turmoil. Through rest the human soul is refreshed, creativity re-emerges, relationships are strengthened and, most of all, we find space to reflect on how we are living and on our relationship with our Creator and our neighbour! We need to stop and find rest. Only that way will we find the inspiration, creative energy and vision to engage authentically with God’s world.